This is the second post about tooltips. In this post, I will describe a technique to add conditional formatting, of a sort, to your viz. This isn’t a natively supported feature in Tableau (although it would be lovely if it was!), so you have to do a bit of extra work to do it.

I’ve implemented colour-based conditional formatting in a few Tableau Public dashboards. My disc golf analysis dashboards use colour to emphasise the good/bad performance of players. Click here to go to the viz; the tooltips are below.

If the player played better than their rating, they’d get this tooltip:

If they played worse, they’d see this tooltip:

I’ve also used colour to represent a political party’s colour, as shown in my UK General Election viz. The main dashboard is here, but I’ve embedded one of the worksheets below. Hover over the different parties (Labour, Conservative, etc) to see the different colours in the tooltips:

There are a few limitations to using colour. Essentially, this boils down to having a Dimension or Group where the possible values are known ahead of time and are relatively small. Why’s this? Because to take advantage of conditional tooltips, you need to create a specific calculated field for each Dimension value.

Here’s the steps to create the coloured Party tooltip in the General Election dashboard.

That’s it! All but one of the calculated fields will be Null at any one time (since you can’t hover your mouse over more than one mark at a time). Therefore, despite there being four items in the tooltip, the viewer only ever sees one. And it just happens to be in the correct colour. Bingo!

That is outstanding. Thank you for posting that, I’ve already started making use of this approach

One question: Is there a way to exclude the Conditional Dimensions when you exclude to Excel (i.e. to Crosstab)? I’m guessing the answer is no, but thought I’d ask.

I am working on a a Report that needs conditional formatting by color.

For Example: I have two sets of numbers for the same measure form two different sources and I am showing the variance between the twpo sources.

Does anyone have any suggestions?

Text-labelled bars: beyond the default 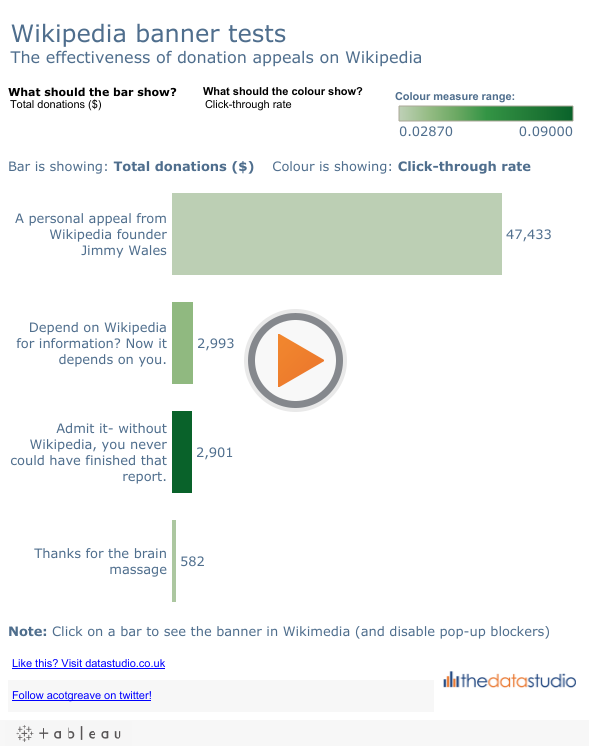 The joy of six: add an “About” box

The journey is the destination